I am really enjoying the current series of Bake off. Does anyone else think the challenges are even more difficult this year? It’s been great to see gluten free baking featured on the show and I wasn’t surprised that the bakers found gluten free bread so tricky!

It’s been a few weeks since I’ve posted a GBBO related bake, so today I am going to share with you my recipe for gluten free LadyFingers as featured on Victorian Week, as part of the Charlotte Russe Showstopper. 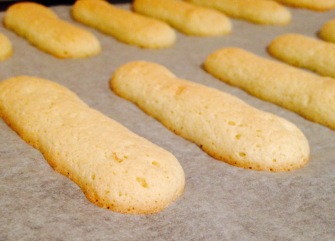 LadyFingers, or Sponge fingers as they are also known, are a vital component of number of bakes, including trifle and tiramisu. They are made from a fatless sponge batter, so a good electric whisk or stand mixer is required to whip up enough air into the batter. I am also pleased to say this recipe is Xanthan gum free, perfect for those of you who struggle with Xanthan gum and other binding agents.

So, what are you waiting for? It’s time to start planning your very own Charlotte Russe Showstoppers, complete with gluten free LadyFingers!

3. In a large bowl: whisk the egg yolks with a electric hand mixer for a few seconds then add the half of the caster sugar and the vanilla extract. Beat the eggs for a few minutes until the mixture is very thick.

6. Transfer the mixture into a piping bag which is fitted with a 1/2 inch nozzle.

7. Pipe the batter into 7cm long fingers leaving a good gap between each one to allow them to expand slightly.

8. Bake for 6 to 8 minutes, until slightly golden brown.

9. Leave the fingers to cool on the tray for few minutes then use a palate knife to transfer them to a cooling rack.

You can keep up to date with my kitchen adventures on Instagram or Facebook. I’m also pleased to announce I am going to be contributing the occasional recipe to the Daily Spectacle website and you can find both my gluten free Blueberry Muffin Recipe and my gluten free Maple and Pecan Granola Recipe there already!

I'm a free from food blogger living with Narcolepsy.